A history of talent

As a member for 45 years, and having sung under all the Orpheus Musical Directors, choir chairman Clifton Hughes briefly gives his view of the contribution each has made (limited by the space available in the programme for our 50th anniversary concert.)

John Railton (1969-84)
John Railton (pictured) grew up in Streatham. At the Royal Academy of Music he studied organ and piano. He was one of two tenors in the small choir there - the other, I discovered much later, being my late uncle Norman McCann. Students were forbidden at that time to take professional engagements, so they were forced to do so under pseudonyms. John recalled Uncle Norman with his usual gentle lack of tact: “a terrible strangled voice”.
John became well known nationally when he went to teach at Ealing Grammar School for Boys. Here he established a daily 8.30 choir practice, with such effect that the choir was soon taken on by the BBC. The trebles became much in demand by the BBC Symphony Chorus and Orchestra and they appeared in many Prom concerts. John also conducted the famous Ernest Read Christmas concerts for children.
Having lost his left arm to cancer, John became adept at playing the organ with extra pedalling to cover the missing notes, and was expert at DIY, which, as he said in a TV interview, he carried out “single-handedly”.
John moved to Hertfordshire and created a full time music course at North Herts College, where he set up a three-handed piano partnership with Kate Elmitt. They performed widely, from London’s South Bank to Australia and Singapore, often using arrangements that had been passed on by the famous duo of Cyril Smith and Phyllis Sellick. John founded the North Herts Guild of Singers in 1968 and the Orpheus Choir the following year, and rehearsals were held in the recital hall in the college.
I played percussion for John as well as singing in his choirs and occasionally accompanying them, and, always attentive to the conductor, was tricked again and again into stopping during rehearsals when John dropped his arm, only to realise that he was merely turning over the music and had started giving the beat again.
John was appointed MBE in 2012 for services to music, and to our great sorrow, he died in 2013.

Michael Procter (1984-89)
When John moved from the area, Michael, who was Director of Benslow Music Trust, took the helm. Whereas the Guild and the Orpheus had previously met fortnightly, alternating on Thursdays, now they became independent weekly choirs, with their own committees, and both started meeting at Benslow.
Michael was a specialist in early music and led us to perform Byrd, Victoria and other unaccompanied music at a standard we had not previously ach­ie­ved, and from which we gained both satisfaction and a wider reputation.
Michael’s reign might have been our golden age of excellence in singing music of this period, but he had a passion for performing the music in the Latin pronunciation peculiar to that period and country. We sighed inwardly when he introduced each new variant in Latin vowels and sibilants: “this piece is in 18th century French Latin”. More positively, Michael had lived in Germany and the choir’s excellent pronunciation of the works of Bach was remarked upon on a number of occasions.
Michael’s status as a German speaker smoothed the way for the choir’s two expeditions to our twin town, Bingen-am-Rhein, where we both socialised with the locals and sang services at the Rochuskerk.

David Lawrence (1989-90)
David was a keen young graduate who brought with him many vocal arrangements he had made for his choir at Warwick University, some of which we still enjoy. He introduced new locations for us to perform, including the delightfully named Long Itchington, Warwickshire.
The actor Nigel Hawthorne spearheaded a campaign to raise money to set up a hospice in the area (now Garden House Hospice Care) and organised a fund raising event at the Gordon Craig Theatre in Stevenage, enrolling many of his acting friends including Judi Dench, Patricia Routledge, Prunella Scales and Timothy West. The remarkable result was a Royal Gala Evening in the presence of His Royal Highness the Prince Edward.
During a chat with Nigel, whom she met at a party through her Italian evening class, choir member Anna Gray suggested he might include the Orpheus Choir in the programme. He liked the idea, and since the event was on November 12th he requested a set of WW1 songs. David arranged a set of three for us to sing at that occasion.
It was only too short a time before David moved away from the area as his career progressed.

Richard Lambert (1991-2)
Richard brought both a passion for the music of Malcolm Williamson, several of whose works we performed, and several members of his church choir at Royston, who delightfully swelled our ranks during his leadership, but sadly left us when Richard left the area.

Juliet Abrahamson (1992-3)
Juliet was the daughter of Norman Hearn – one of the small group who stopped Benslow from being closed in the 1970s and worked, as Chairman, to get it back on its feet as a nationally important adult music centre. We loved her musicality and upbeat personality.

Janet Wheeler (1993-4)
When we appointed Janet to the choir, my children were wildly excited that such a famous person was
arriving. She was a Producer for BBC Schools’ Radio music programmes so that they had heard her name
many times over the airways. Janet (pictured) writes wonderful choral music and we loved her warm and encouraging approach, but sadly she found the journey from Saffron Walden too onerous, and left us to concentrate on​ her choirs nearer home.​
Andrew Hind (1995)
Andrew was a young local music teacher with much energy, which took him out of the area when he had been with us for exactly a year.  We have an abiding memory of him in the Roman Catholic Church in Hitchin, performing the Post Horn Gallop on a length of garden hose into which he had pushed his tuba mouthpiece at one end and a kitchen funnel at the other, and which he swung dramatically round his head as he reached the climax.

Ian Harrold (1996-99)
Ian read mathematics at Oxford, and had a career as a computer manager, music teacher, instrumentalist, composer and conductor.  He had directed Stevenage Male Voice Choir for some time before we appointed him to the Orpheus, and he brought with him many arrangements and compositions that he had made for them and converted for our mixed voices.  He moved to Gloucester Cathedral as a Countertenor Lay Clerk, so it was through him that we had the joy of going to Gloucester several times to sing for services.

Andrew Moxon (1999-2002)
Andrew was the enthusiastic new Assistant Director of Music at the Knights Templar School in Baldock. He had been a boy chorister at Westminster Abbey and brought us a particular interest in a range of British church and choral music that we had not previously encountered: Walton, Holst, Finzi, Vaughan Williams and others.
Benslow Music was becoming more and more successful in running its residential courses, and when we were squeezed out we often met at St Michael’s, Letchworth, where I was temporarily the organist, and which favour we repaid by occasionally singing for a service.
Perhaps our most memorable concert with Andrew was the one to celebrate the installation of a fine new organ in the church, for which we commissioned a new anthem, Sweet Music Breathe, performed the Allegri Miserere whilst processing around the church, and at which we (predictably) sang The Lost Chord in memory of the old organ, which had given up the ghost.
​
David Bullen (2002-4)
David was Andrew’s replacement at the Knights Templar School, which (a) meant that he was singularly talented and (b) made it inevitable that he would move on to a more senior appointment after a couple of years.
It was with David that we sang several Advent carol services at St James’s Church, Stanstead Abbotts.  This is a redundant medieval Anglican church near Ware with an unrestored 18th century interior, and which has Grade 1 architectural status.  This extends to the lack of electricity, resulting not only in these very atmospheric services being held by candle light but also involving a man delegated to pump the wind when tipped the wink by the organist.
Some members particularly recall a St Cecilia concert at St Mary’s, Hitchin, in which we combined with the Knights Templar School choir, the choir of St Mary’s and an instrumental ensemble to perform a succession of joyous works culminating in Britten’s St Nicholas.
It was also under David that we sang The Triumph of Harmony, a piece by Harvey Brough written to celebrate the centenary of Letchworth Garden City, and which involved a jazz band and Jacqui Dankworth as soloist. 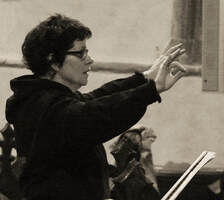 Anne-Marie Hetherington (2004 to date)
We were delighted that Anne-Marie agreed to become our musical director despite her
reservations over our taste in music, which was revealed when she attended our final concert with
David: a performance of Summer Sunday, by Joseph Horovitz.  I seem to remember that she joined
on the proviso that we never ask her to do this piece (though we ourselves thought it was rather
fun.)
Anne-Marie was an opera singer before changing career to pass on her love of music to other
​ people as Head of Performing Arts at Hitchin Boys’ School.  We value her insights into the music we perform, and bathe in her musician­ship.  As a singer herself she knows all about voice production; all choirs start their rehearsals with vocal exercises, but one of our members – a speech therapist – said that Anne-Marie was our only conductor who knew how to warm us up properly: an unusual professional accolade.
With Anne-Marie we have performed from Benington to Blunham, from Rochester to Rushden, and from Great Wymondley to Gloucester, and we have sung music of all periods, from Hildegard of Bingen (1098-1179) to the new works in our Jubillee concerts.  We look forward to enjoying much more music making with her.
Powered by